Gout is a disease produced by excess uric acid, a nitrogen breakdown product, in the blood (hyperuricemia). The uric acid forms crystals, especially in the fluid of joints. There the crystals are then surrounded by white blood cells (phagocytosis), producing an intense but localized arthritis most commonly involving the first joint of the big toe. 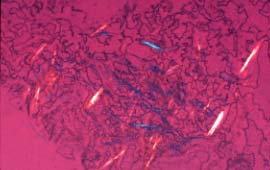 Some people, often males, have such high blood levels of uric acid that they have deposits of solid masses of uric acid, known as tophi, which can be felt in the skin covering the joints, in the ear lobes and in the finger pads. These patients frequently also pass tiny uric acid stones, calculi, in their urine.


What Causes the Excess Uric Acid?
In most gout patients, the high levels of uric acid occur because their kidneys do not efficiently remove the uric acid. The cellular mechanisms for this defect are still not well understood. Postmenopausal women can develop hyperuricemia as a result of prolonged diuretic therapy they are receiving for water retention. Cyclosporin A, which was used primarily to prevent transplant rejection and is now is used in the treatment of connective tissue diseases, including rheumatoid arthritis, can also cause frequent attacks of acute gout.

Approximately 20% of patients with gout actually have a primary metabolic disorder leading to the overproduction of uric acid. These patients have an early onset of gout, a high incidence of tophi and urinary calculi.

The enzymatic defects that can cause gout include a deficiency in one of the two enzymes that recycle purines, a basic protein building block. Instead of reusing the purines, they are metabolized to uric acid, a metabolic end product in all primates. Another enzymatic defect interferes with an inhibiting control and, thus, promotes increased uric acid production. These particular mutations account for only a small fraction of the patients who, genetically, overproduce uric acid. The explanation for the remaining overproducers is still unknown but may represent partial defects or different mutations.


The Joint Symptoms
During an acute attack, it is now believed that crystals of uric acid enter the joint fluid and are coated with an antibody directed against uric acid. This coating mobilizes white cells to produce a chemotactic factor, a chemically "sticky" substance, cytokine -- IL8, which encourages and perpetuates the inflammatory response.


Treatment
A physician makes the diagnosis of gout by the microscopic identification of the uric acid crystals. Treatment of an acute attack of gout with oral colchicine has been largely abandoned. Antiinflammatory doses of a nonsteroidal antiinflammatory agent (NSAID), often with an initial extra dose on the first day of treatment, is now the treatment of choice.

Many people, however, cannot be treated with NSAIDs. They may have a history of gastric bleeding or kidney disease and will need to be treated with short courses of corticosteroids or intravenous colchicine.


Prevention
Daily doses of oral colchicine, 0.6 mg twice a day, can significantly decrease the frequency of acute attacks, especially in patients who have had more than one attack of gout per year. Allopurinol, an enzyme inhibitor, can effectively reduce the synthesis of uric acid. The use of allopurinol is generally limited to patients who are uric acid overproducers, have a history of urinary calculi, tophi or recurrent gouty attacks despite colchicine prophylaxis and have persistent hyperuricemia.