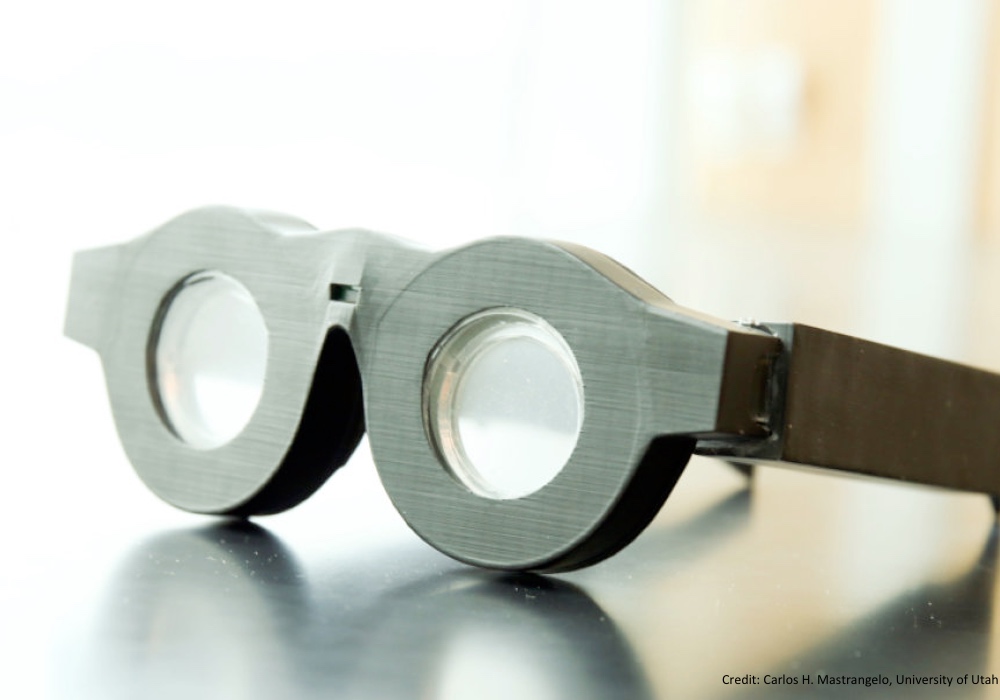 Eyeglasses that Change with Your Vision

Neil Wagner
In the works: glasses that adjust the way your eyes' natural lenses do.

Eyeglasses help millions of people see better but they are unable to adapt to changing circumstances. Their rigid plastic lenses can't adjust the way our eyes' lenses do. Now researchers have developed glasses that change their focus when you do, offering a close-up when you need one and refocusing on the distant when you look at far away objects.

Even normal eyes lose their flexibility and ability to focus as people age. The aging eye is subject to all manners of problems, from simple nearsightedness to cataracts, which is one reason why so many older people need to wear glasses, bifocals or contact lenses. But asking a piece of plastic to duplicate the function of something as complex as the human eye is asking a lot.

They're fluid-filled, with lenses of glycerin sandwiched between two membranes.

The new glasses take their cue from the eye itself. Like the eye, they're fluid-filled, with lenses of glycerin sandwiched between two membranes. Unlike conventional glasses, they can adjust their focus automatically, by bending and flexing the membranes in response to the cues you give them, much as a healthy eye does.
ADVERTISEMENT
It works like this: An infrared sensor in the frames of the glasses detects where you're looking, and the lens changes its focus accordingly. When you gaze elsewhere, it changes focus. It all takes about 14 milliseconds — faster than the blink of an eye.

The glasses provide a full field of vision for both close-ups and long-range views, rather than the narrow view you get with bifocals or trifocals. The only information needed by the glasses is your eyeglass prescription and the location at which you are looking. No more need to wear one set of glasses during the day and another one at night for reading.

University of Utah computer engineering professor, Carlos Mastrangelo, and one of his doctoral students designed the glasses. Says Mastrangelo, “Theoretically, these would be the only glasses a person would ever have to buy because they can correct the majority of focusing problems. Users just have to input their new prescription as their eyesight changes.”

The current prototype is rather bulky, Harry Potter-esque, with sensors and a rechargeable battery, a peril early adopters of new technology often face. The developers are working on making it smaller and lighter and expect to have the glasses on the market in about three years. So don't throw away your old glasses yet.

The study appears in Optics Express.

RELATED STORIES
Aging And Macular Degeneration
Using The Eye To See Into The Brain
Lazy Eye: What Parents Should Know
LATEST NEWS