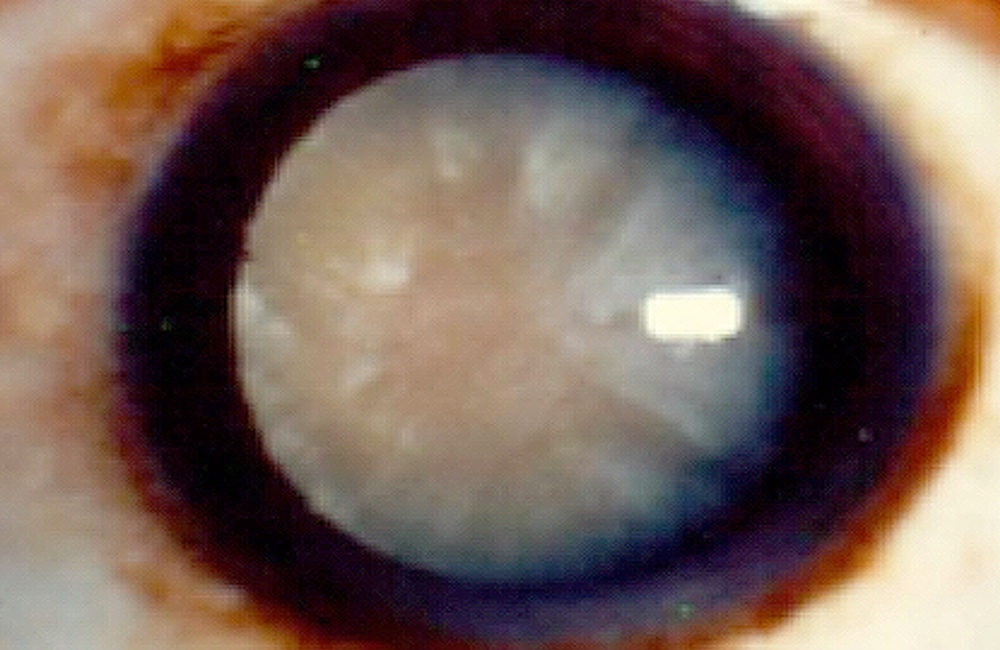 Enoch B. Kassa, M.D and Yang Sun, M.D., Ph.D.
Cataracts are the leading cause of blindness around the world even though they are usually fully correctable with surgery.

Cataracts are the leading cause of blindness in the world. They cause serious losses of vision, but unlike other eye problems, such as glaucoma or age-related macular degeneration, cataracts can usually be corrected with surgery. Most seniors with cataracts in Western nations have this surgery, in which the lens of the eye replaced with a synthetic intra-ocular lens before significant vision loss occurs. In fact, cataract removal with intraocular lens implant is the most commonly performed surgery in the United States.

A cataract is created by the degeneration of the lens of the eye. The lens normally allows light to be transmitted and focused onto the retina, and its degeneration causes gradual vision decline.

ADVERTISEMENT
Despite major surgical advances to correct cataracts, non-surgical options remain nonexistent. Non-surgical treatments, if they were to become available, would help the millions of people in developing nations lacking the capabilities to perform surgeries.
A Common Problem of Aging

Cataracts develop with advancing age, and men and women are equally affected. It is uncommon to develop cataracts before age 40, but people in geographic regions with high UV light exposure develop cataracts at higher rates and at earlier ages.

Among people aged 43 to 86 of age in the US, the 10-year incidence of cataracts is 54%. Australia has the highest reported incidence, with 72% in people over the age 49 being affected.

It is estimated that 15 million people are blind from cataracts in the world. The proportion is considerably higher in developing countries where specialized surgical management is not available.[3]

We don't know why or the exact way cataracts form. We do know that the lens in our eye is made up of epithelial cells that are rich in proteins. With age some of these lens cells degenerate and the denatured proteins begin to cause distortion of light, which ultimately may result in complete blockage of light.

Cataracts can also be caused by exposure to the sun, smoking, alcohol consumption and metabolic syndromes including diabetes.

During aging, the lens in your eye becomes thickened and decreases its ability to refract rays of light. This is likely the result of the increasing amounts of insoluble protein particles which accumulate and lead to changes in the proteins of the lens, causing clouding and refractive changes.

In addition to the damage to proteins, genetic mutations can also contribute to the formation of cataracts.

ADVERTISEMENT
It is uncommon for young people to develop visually significant cataracts. There are a few rare syndromes and in-utero infections that may result in congenital cataracts, but these are not discussed here.

Exposure to the sun, smoking, alcohol consumption and metabolic syndromes including diabetes can also cause cataracts. In fact, any environmental stressor causing continuous damage to the lens is believed to contribute to cataract formation.

One study found that people who smoked more than 15 cigarettes per day had a 42% increased risk of cataracts, compared with those who had never smoked. Similarly, quitting smoking reduced the need for cataract extraction over time. [2]

Alcohol
Heavy alcohol consumption — more than two standard drinks per day — is also associated with an increased risk of age-related cataract. [5]
Obesity
Metabolic syndrome and its components, such as abdominal obesity, high blood pressure, and impaired fasting glucose, have also been found to be associated with age-related cataract formation. One study found people with metabolic syndrome have a 46-49% increased risk of developing any type of cataract. [6]
Non-Age-Related Sources of Cataracts
Secondary cataracts or acquired cataracts, as opposed to age-related cataracts, are caused by direct lens insult through infection, autoimmune illness and/or radiation therapy.

Certain medications have also been associated with cataract formation. Patients on either topical or systemic corticosteroids are at higher risks for development of secondary cataracts. With the increasing use of corticosteroid in patients with inflammatory diseases, such as rheumatoid arthritis, there is corresponding rise in medication-induced cataracts.

A Loss of Vision, A Decreased Quality of Life

People with cataracts usually experience a progressive decline in vision. Problems with vision in low light, especially driving at night, is a common initial complaint. Difficulties reading fine print is another early symptom. This is because, in many cases, the shape of the lens is altered by the cataract, and this makes nearsightedness worse.

As the cataract progresses, people may experience decreased color vision, noting bright objects appear dull in color. They may come to find the cataract interferes with daily activities such as reading the newspaper and watching television. When cataracts are left untreated, a person with cataracts can become very disabled and may even require assistance with self-care.

Not surprisingly then, cataracts can have significant effects on a person's quality of life. [7] Being unable to see clearly is hard on people. A person with cataracts may no longer be able to enjoy certain activities, especially those requiring near-vision. These limits on daily activities can also mean a loss of income if they impair a person's ability to do his or her job. They can also lead to a decrease in social interactions and an increase in dependence, with depression a likely result.

There are currently no non-surgical therapies to reverse the effects of a cataract. Surgery is the only option. One may be able to delay the progression of cataracts by avoiding the factors mentioned above, such as smoking, sun exposure, and exposure to corticosteroids.

In the early stages of cataracts, vision can be improved with a change in spectacles. As the cataract progresses, over the course of months to years, however, increasing the strength of prescription glasses will lose its effectiveness and cataract surgery will be required to restore vision.

Similar to prescription glasses, the intra-ocular lenses inserted during cataract surgery have specific power unique to the patient’s eyes. There are several types of lenses available commercially, and people are generally offered several options to choose from.

Vision improvement after cataract surgeries is often immediate, and complications for cataracts are uncommon and decreasing.

During cataract surgery, the inner lens material is removed and a new synthetic lens is inserted. The surgical procedure is done as an outpatient service — patients can go home a few hours after the procedure. If both eyes need cataract surgeries, the first operation is on the eye with the worse vision, with the second eye to follow, typically within a month. Same-day surgery for both eyes is avoided to prevent bilateral complications such as infection.

Phacoemulsification is the process by which the eye's lens is broken up using an ultrasonic probe and then removed. This is the surgical method used in developed countries. In recent years manual small incision cataract surgery (SICS) has gained acceptance, especially in developing countries.

Possible Complications
The improvement in a person's vision after cataract surgeries is often immediate, and complications for cataracts are uncommon and decreasing. [4] Infections and bleeding are the most common complications, and these occur in less than 1% of all cataract surgeries performed. However, in risk-prone populations, such as those with high myopia and eyes injured by trauma, the rates may be much higher.
Recovery
It usually takes between one to two weeks to recover from cataract surgey. Some people may require longer time to recover if an underlying condition, such as diabetes, is present.

The lenses implanted during cataract surgery will last a lifetime in most cases. Clouding may occur at the back of the eye capsule in the months to years after a cataract surgery. This clouding, called posterior capsule opacification or PCO, is the most common complication after cataract surgery, with an incidence of 30%. [9] It is removed using a special laser. PCO is considered routine post-surgery, and only takes minutes to perform, without returning to the operating room.

New Treatments on the Horizon

Surgical treatment for cataracts is very effective and safe. However, it requires specialized equipment and highly trained physicians, both of which are generally unavailable in many parts of the world, so other approaches are being tested. New studies have looked into peptide-based treatment strategies for cataract. These would have the potential to medically slow down disease progression by preventing the aggregation of proteins in an aging eye. [11] It may become possible to identify specific peptides which could then be packaged as drugs and used to not only prevent protein clumps from forming, but might also break up proteins in cataracts that have already formed.

Age-related cataract formation is a common and treatable condition. If your vision is blurry because of cataracts, you should not hesitate to look into cataract surgery. The results can improve the quality of your life immeasurably.