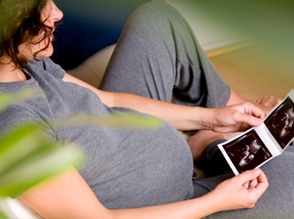 Esther Entin, M.D.
When pregnant women drink alcohol, their babies drink with them.

When a pregnant woman drinks alcohol, her baby is drinking alcohol, too. Alcohol in the mother's blood passes to the baby through the umbilical cord.

The effects of prenatal alcohol exposure are wide-ranging and devastating. When babies are exposed to alcohol in the womb, it can cause miscarriage or stillbirth, as well as physical and developmental abnormalities in the infant that will pose lifelong challenges to individuals, families and society.

No Safe Drinks; No Safe Amounts
ADVERTISEMENT
All types of alcohol are dangerous — including beer, wine coolers and wine. There is no established “safe ” amount of alcohol that a pregnant woman can consume and no safe time to drink, although the risk to the fetus may be highest during the early months of pregnancy when organs are being formed.

Often women consume dangerous amounts of alcohol in the first trimester, before they are even aware that they are pregnant. Even lower levels of consumption, one to three drinks per occasion, can lead to long-term changes in attention, cognition and learning. For this reason, the Centers for Disease Control recommends that sexually active women who do not use birth control should not drink.

Binge drinking during pregnancy, even infrequent, can cause damage because of the high peak alcohol concentration to which the fetus is exposed. The risk of abnormalities increases dramatically once the level of “frequent drinking,” defined as six to eight drinks per occasion, is reached.

The constellation of physical and developmental abnormalities caused by alcohol exposure during pregnancy is called Fetal Alcohol Spectrum Disorder (FASD). Children with FASD often have severe limitations on their social, vocational, and physical potential, and require extra educational, social, medical and community resources throughout their lives.

The Centers for Disease Control recommends that sexually active women who do not use birth control should not drink.

Children with FASD may have a range of problems. They typically look different — having abnormal facial features, such as a smooth ridge between the nose and upper lip (called the philtrum), small head size, vision or hearing problems, shorter-than-average height, and low body weight. They frequently suffer from complications involving their hearts, kidneys, or bones.

As infants they may have sleep and sucking problems. They may exhibit from poor coordination and hyperactivity.

Mentally, children with fetal alcohol exposure often have speech and language delays, difficulty with attention, poor memories, and weak reasoning and judgment skills. These can contribute to difficulty in school (especially with math), learning disabilities, and low IQ.

Together, these four diagnoses make up the overall category of Fetal Alcohol Spectrum Disorders.

The number of children with FASD is estimated to be about three times that of FAS.

Fetal Alcohol Syndrome (FAS) is at the most severe end of the spectrum, with major abnormalities in physical appearance, learning, and behavior. Children with FAS have an abnormally thin upper lip, a smooth area between the nose and the upper lip, and narrower than normal eye openings (palpebral fissures). These children also have the most severe learning, behavioral, and developmental problems.

The lower levels of prenatal alcohol exposure associated with other types of FASD can result in subtler problems, making them harder to track and quantify. The number of children with FASD is estimated to be about three times that of FAS. Now a recent study published in the journal Pediatrics reveals that the problem of fetal alcohol exposure and FASD is actually much more common than doctors believed.

The Study
To try to get a clearer picture of how common FASD is, researchers looked at nearly 1500 first grade students in a community in the Midwest. They evaluated the children for evidence of FASD by physical and neuropsychological examinations and parent interviews.

Mothers were interviewed to determine the risk for fetal alcohol spectrum disorder. The researchers asked mothers about their drinking habits. A woman was viewed as more likely to have a child with FASD if she reported consuming more drinks three months prior to the pregnancy, if she had recognized her pregnancy further into gestation than the average, and had fewer health care provider visits during the pregnancy.

The mental and behavioral symptoms related to alcohol exposure children may have are not always correctly connected to alcohol.

Women were also at risk for offspring with FASD if their husbands/partners consumed significantly more drinks during the pregnancy.

The total rate of FASD in the study population was 24 to 48 per 1000 children yielding a rate of 2.4-4.8%, substantially higher than previous estimates.

What Women Should Do

Fetal alcohol spectrum disorders represent a very common and highly preventable cause of mental retardation and lifelong disability. Women should avoid any alcohol intake during pregnancy. Because serious effects can occur even before pregnancy is suspected or confirmed, women who are anticipating pregnancy or are having unprotected intercourse should abstain from alcohol ingestion, as should women who know they are pregnant.

Women who use alcohol and are anticipating pregnancy should get help for alcohol use disorders prior to conceiving.

The study appears in the journal, Pediatrics.