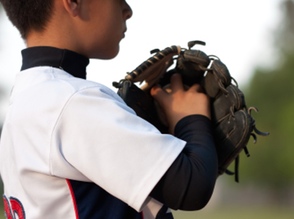 The human shoulder is mechanically complex. It is made up of four joints and three bones, as well as numerous ligaments, tendons, and muscles. The bone at the top of the joint, the acromian, develops from the fusion of four bones during adolescence.

When this normal fusion process is interrupted, a lifetime of painful joint problems can result. The repetitive strain of pitching during baseball and softball is one of the culprits behind the shoulder problems faced by high school players.

The shoulder injuries young pitchers face fall under the general category of overuse injuries — injuries sustained from repeated action — as opposed to acute injuries, which occur in an instant (such as a sprained ankle).

The researchers were seeing younger and younger patients complaining of shoulder pain at the end of the baseball season.

Overuse injuries may occur because the athlete does not have appropriate muscle strength, endurance, or core stability for the activity being performed. They may result from an imbalance in tight, weak and stretched muscles, inflexibility of joints, malalignment of bones, and skeletal and muscular immaturity. Poor training practices, poor athletic technique, and incorrect equipment for the sport or the athlete also contribute to the problem.

There are many types of overuse injuries seen in children and adults — bursitis, tendonitis, carpal tunnel syndrome, and tennis and golfers' elbow. And to that list we can now add the shoulder inflammation seen in many young pitchers that prevents the acromian from forming.

Too Inflammed to Develop Properly
Researchers at Thomas Jefferson University in Philadelphia found that young baseball pitchers who throw more than 100 pitches per week were at risk for a newly identified type of shoulder injury related to overuse. This injury, called acromial apophysiolysis, can lead to potentially irreversible problems, such as rotator cuff tears, later on.
ADVERTISEMENT

Inflammation can interfere with normal fusion of the acromian bone. This then leads to an increased risk of shoulder injuries, specifically rotator cuff tears later in life.

The researchers were seeing younger and younger patients complaining of shoulder pain at the end of the baseball season. However, magnetic resonance imaging (MRI) of their painful shoulders did not show the kind of damage one expects to see with shoulder pain, such as tears in the tendons or labrum, a structure within the joint.
Pain and Problems That Can Last a Lifetime
What they did show was edema, or swelling and fluid, at the acromium. When the investigators reviewed the MRI records of 61 patients with shoulder pain under the age of 25, they found that patients with edema had incomplete fusion of the bones of the acromium, or acromial apophyiolysis.

Inflammation can interfere with normal fusion of the acromian bone. This can lead to an increased risk of shoulder injuries, specifically rotator cuff tears later on in life.

Overpitching (more than 100 overhand throws per week) can lead to overuse injuries that have acute and long-lasting impact on shoulder function in teens and adults.

The young injured pitchers were treated with rest (no pitching for three months), and non steroidal anti-inflammatory drugs. One had surgery. Follow up MRIs were done at least two years later, after the players turned 25.

The results were compelling. Eighty-six percent of the players who had been diagnosed with acromial apophysiolysis showed persistent incomplete fusion of their acromian bone, presumably caused by the earlier injury. In contrast, only four percent of the healthy players had this finding.

Long-term follow up revealed that more than two-thirds of the overuse injury group had experienced rotator cuff tears, compared with 29% of the control group. Additionally, the tears in the overuse group were more severe.

What Parents — and Coaches — of Pitchers Need to Know

The message is clear. Overpitching (more than 100 overhand throws per week) can lead to overuse injuries that have acute and long-lasting impact on shoulder function in teens and adults. The research suggests that parents, coaches, and atheletes should take steps to limit their pitching time, get sufficient breaks between workouts, recognize early signs of overuse and receive appropriate attention.

It may be smart to limit young athletes’ training, and vary the kinds of sports they play, Johannes Roedl, corresponding author of the study, told TheDoctor. “In this case, I think we have discovered something of clinical relevance, that is important for coaches, parents, and young athletes to know: don’t overdo it,” he said.

Roedl, an attending radiologist at Thomas Jefferson University Hospital, said that he has been an athlete himself since his youth, so he is very much in support of kids participating in sports and having fun. However, “I have always felt that if you overdo it, there may be some harm, especially in kids, because bones don’t develop normally.”

Parents are often the problem. Roedl pointed out the dangers of pushing kids too hard. In extreme cases, “Parents want their kid to have so-called ‘Tommy John’ elbow surgery, even if they are healthy, because there have been reports that kids have been able to throw harder and faster after surgery,” he said.

Roedl recommends young athletes play different sports, play different positions on a team, and avoid repeating a motion (such as pitching) excessively. If they pitch, kids should throw fewer than 100 pitches per week.

The study was published online recently in Radiology.