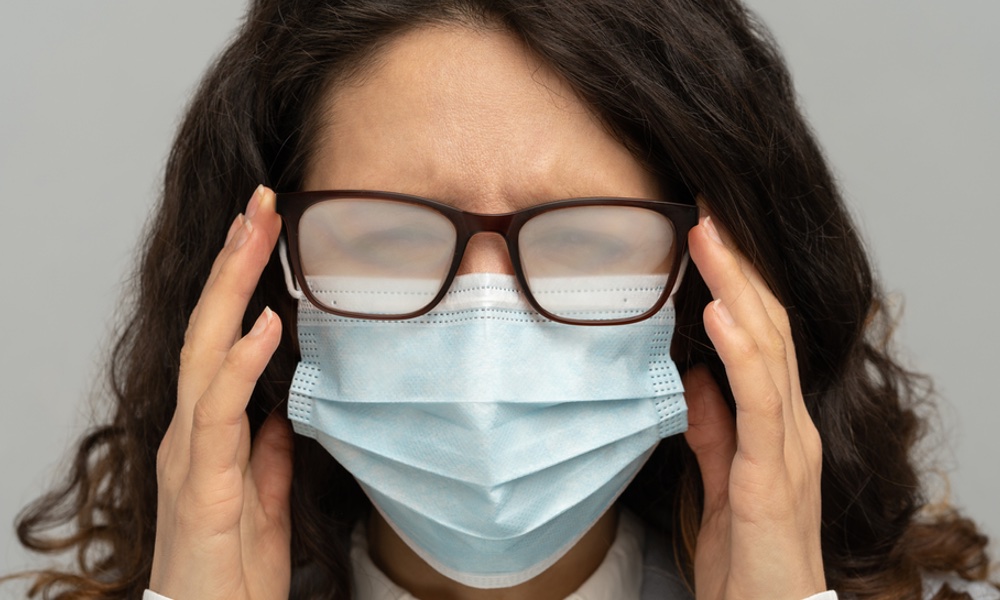 While shopping for an anti-fogging spray for her 9-year-old, a professor of environmental engineering was surprised to find toxic PFAs listed in the ingredients.

People who wear glasses have been fighting a second battle throughout the pandemic — to be able to see. Wearing a face mask makes glass lenses fog up. The condensation that collects on them renders eyeglasses and sunglasses nearly useless, a frustrating daily battle for the millions of people who rely on frames to help them see clearly.

This ocular challenge has led to a sharp increase in the purchase and use of anti-fogging sprays and cleaning cloths designed to keep lenses free of condensation during mask wearing. But now it appears those products carry their own risks.

“Our tests show the sprays contain up to 20.7 milligrams of PFAS per milliliter of solution, which is a pretty high concentration.”

Scientists at the University of North Carolina, Chapel Hill, Duke University and Wayne State University joined forces to investigate the toxicity of these products, a project inspired by a purchase one researcher made for her daughter.
ADVERTISEMENT
After inspecting the ingredient label on a bottle of anti-fog spray she bought for her nine-year-old, Heather Stapleton, a professor of Civil and Environmental Engineering at Duke University, became alarmed at the inclusion of toxic PFAs (per- and polyfluorinated alkyl substances) in the product. “Ironically, it was advertised as safe and nontoxic,” she said in a statement. “It said to spray it on your glasses and use your fingers to rub it around.”

PFAs, for example perfluorooctanoic acid (PFOA) and perfluorooctanesulfonic acid (PFOS), are known to cause cancer, reproductive harm, and impaired immune and thyroid function, among other harmful side effects.

The research team looked at four top-selling brands of anti-fog sprays and five types of anti-fogging cloths, and found that all of them contained PFAs, including some PFAs that have not been fully studied to identify their effects. These compounds, called FTOHs and FTEOs, are potentially as harmful as other PFAs.

“Our tests show the sprays contain up to 20.7 milligrams of PFAS per milliliter of solution, which is a pretty high concentration,” said the study’s lead researcher, Nicholas Herkert of Duke University, in a statement. “If we were to assume that FTOHs and FTEOs have similar toxicity to PFOA and PFOS, then one spray from these bottles would expose you to PFAS at levels that are several orders of magnitude higher than you’d receive from drinking a liter of water that contains PFAS at the current EPA health advisory limit for safe consumption, which is 70 nanograms per liter,” Herkert added.

Only one of the nine products the team tested listed their ingredients on the label, making it nearly impossible for the average consumer to know what is in the products they purchase. Researchers note that this is especially problematic when products are being advertised as non-toxic and safe. They hope to expand upon their research by testing even more products, noting that they were working with a relatively small sample size.

ADVERTISEMENT
If you need to wear glasses while you are wearing a mask and are plagued by the condensation that drives many to the use of an anti-fogging spray, try getting a tighter fitting mask that sits higher up on the nose bridge. This might help you avoid the need for an anti-fogging product that might expose you to harsh and harmful chemicals.

The study is published in the journal Environmental Science and Technology.