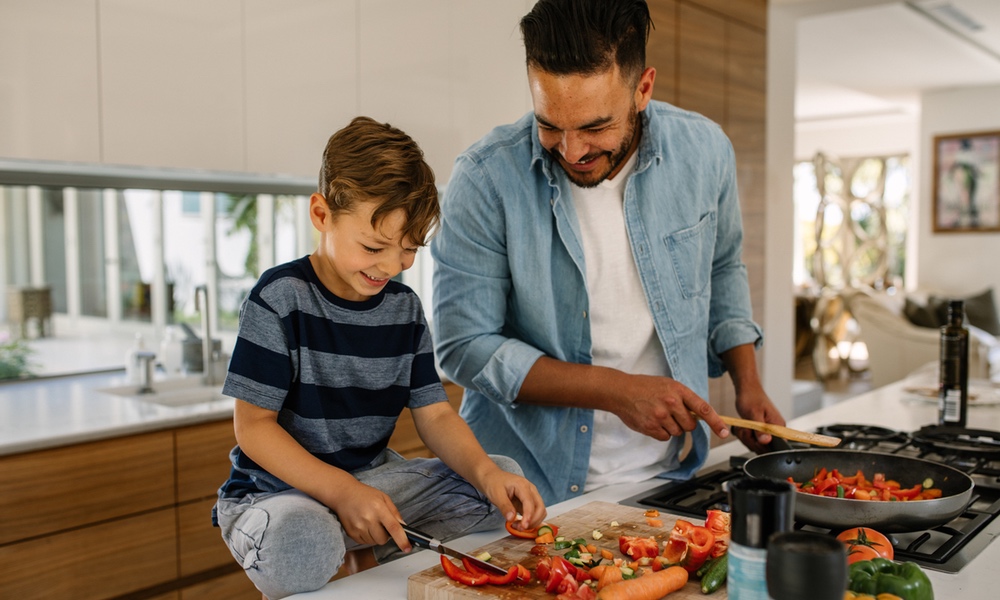 Kids in the Kitchen

Beth Fontenot, MS, RD, LDN
One good way to give your kids healthy eating habits is to have them help prepare food at home.

People who know how to prepare their own food at home eat better, eat cheaper and are healthier. So it's a problem that many young adults today don't know how to prepare food. There's a good reason why they don't compared to teens who grew up in the 1940s, 50s and 60s — with so many women working outside the home, many teens have mothers who have little time to cook and even less time to teach them to how to cook.

Add to this that home economics classes don’t attract many students anymore — if the course is even offered. But a new study finds that when teens have an opportunity to develop their cooking and meal preparation skills, long-term health benefits follow.

Teens in schools in the Minneapolis-Saint Paul area were asked to rate their cooking skills when they were 18 to 23 years old. Years later, the same group, now between the ages of ages 30 and 35, was again asked about their cooking and eating habits.

When teens have an opportunity to develop their cooking and meal preparation skills, long-term health benefits follow.

When asked at 18 to 23 years old, most of the teens said their cooking skills were “adequate.” About a quarter of them said their skills were “very adequate.” When researchers followed up with a questionnaire years later, the group who perceived their cooking skills as very adequate ate fast food less often and were more likely to report they prepared a meal that included vegetables most days of the week. Those with children also ate family meals more often, ate less fast food and reported fewer obstacles to meal preparation.

Teens who learn how to cook are more likely to enjoy long-term health benefits, explained Jennifer Utter, lead author of the study. She believes that investing in home economics and cooking classes when kids are in high school, sows the seeds of healthy eating down the road, even if “…the benefits may not be fully realized until young adults develop more autonomy and live independently.”

It's a long-term investment parents would do well to make. When kids are taught to cook and given chances to prepare meals or help in their preparation, they learn a life skill that can't be taken away from them and which promotes their future health and that of their families.

Six Ways to Get Kids Started in the Kitchen
Getting your teen interested in cooking may take some effort, but helping to prepare meals can quickly become second nature if you approach it the right way. Here are some suggestions:
ADVERTISEMENT
ADVERTISEMENT

Cooking with your kids is not always easy, but the rewards, in health and time spent creating something together — even when the inevitable mistakes happen — will give you both something you can carry with you in the years to come.