Of (Bald) Mice and Men

Neil Wagner
Serious hair re-growth is accidentally discovered in stressed mice. Are men are next?

Researchers have succeeded in re-growing hair in badly balding mice. While it's not clear yet if this will be helpful for people, the effect is striking (see image).

The re-grown hair was 'largely retained' up to the study's end, four months afterward. This is a major portion of the mouse lifespan, which is under two years.

The hair re-growth was an accidental discovery. It was the byproduct of a joint UCLA/Veterans Administration research project designed to measure the effect of stress on the gastrointestinal system. The overstressed mice used in the study had all lost a large patch of hair from their back. During the study, the researchers noticed that their treatment had caused substantial hair re-growth — so much that the mice could not be distinguished from their non-stressed counterparts. The re-grown hair was "largely retained" up to the study's end, four months afterward. This is a major portion of the mouse lifespan, which is under two years.

ADVERTISEMENT
The researchers worked with mice that had been genetically altered to overproduce the stress hormone CRF (corticotrophin releasing factor). Part of the effect of this stress hormone elevation is that the mice lose hair (and skin pigment) from their backs as they age and can easily be told apart from normal mice by eye alone.

In this study, the researchers treated the mice with a compound called astressin-B. This compound binds to the same receptor as CRF, essentially blocking and neutralizing the CRF. Mice were given intraperitoneal injections of astressin-B for five consecutive days to study its effects on gastrointestinal stress. The mice were then put back into a communal cage along with the other normal, non-stressed mice. 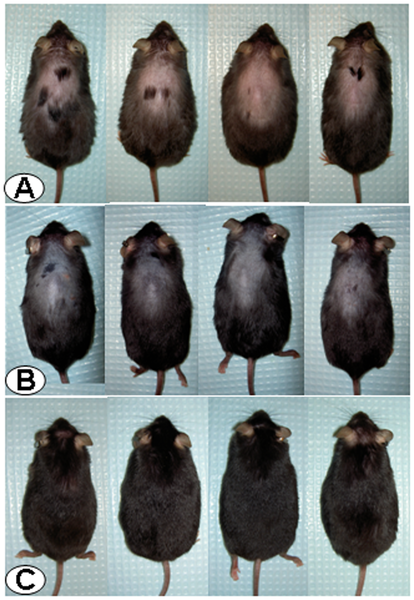 Stress is known to play a part in hair loss. What isn't known is whether this treatment will be useful in people or even in mice with normal stress hormone levels.

ADVERTISEMENT
There are two schools of thought as to what this may mean for people struggling to live with hair loss. On a positive note, CRF and its receptor are both found in human skin. And humans and mice both show the same reaction to minoxidil: mild hair growth. UCLA and the Salk Institute envision a definite potential treatment and have already applied for a patent on the use of astressin-B for hair growth in humans.

But in an article published by the New York Times on February 16, Dr. George Cotsarelis, chairman of the dermatology department at the University of Pennsylvania School of Medicine, cautioned that the hair growth cycles are very different in mice and humans, so one could draw only limited conclusions from the research. Dr. Cotsarelis said that any treatment developed from the research would probably be useful only for hair loss specifically related to stress, like that caused by one-time events.

Right now no one knows for sure.

The researchers' article was published February 16, 2011 in PLoS ONE and is freely available.