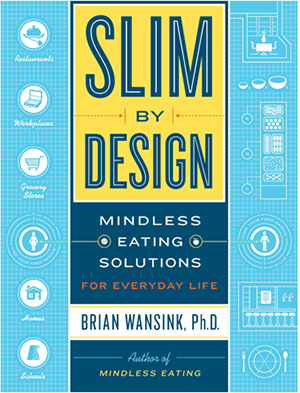 Most of us are guilty of mindless eating — whether munching in front of the television or stopping for a quick bite at a fast food place on our way home from work. But we can also make our mindless eating tendencies work for us, according to Brian Wansink, a nutritionist, professor and, Director of Cornell University's Food and Brand Lab, a leading researcher and expert on eating behaviors. His newest book, Slim by Design, shows how we can lose weight simply by finding ways to make the right decisions more or less mindlessly when we eat. The most natural way to lose weight, he says, is to work with human nature rather than against it. This means not telling yourself or family members what to eat or not eat, but making it easier to make better food choices at home, at work, at school, and at restaurants. For example, if you want to eat less when eating out, order a to-go box with your meal and put some of your meal in it before eating. At work, leave your desk for lunch. At home, have a full bowl of fruit on the counter. These tips are not just good ideas; they're based on studies done by the Cornell lab. Among their findings:
ADVERTISEMENT
By also changing how you eat outside the home, you can become Slim by Design. Wansink offers lessons for eating in restaurants, workplaces, schools and grocery stores. Here's a little example of how he helped Google employees avoid gaining their version of the Freshman 15 — the excess pounds people put on when they suddenly find themselves faced with an enormous array of delicious, and free, food.


Trimming the Google-Plex of Food
SOME COMPANIES USE FOOD as a competitive weapon. Take Google. Since opening its binary doors in 1999, it’s had the policy of offering bountiful food to all its lucky surfers. When Google decided to make food free, they did it big. First, they installed dozens of free snack rooms they call “micro-kitchens,” which are rumored to be within a few dozen steps of most workers. These have all the snacks, cold drinks, coffee, and fruit you can imagine, and you can take it when you want it—before work, during work, and after work (but don’t take it home). Second, they have amazing cafés that serve almost anything you would imagine (sushi, BBQ, curry, burgers, chili, Jell-O, dessert bars) and some foods you wouldn’t imagine (kale and pumpkin pizza). Grab a tray and pile it high. Go back for seconds. And again, it’s all free, all the time. Unfortunately, there’s also the urban legend of the “Google fifteen.” It’s the fifteen pounds new Googlers—they’re called Nooglers—are (wrongly) rumored to gain shortly after joining the tribe. This isn’t unique to Google. There are also rumors of the M&M/Mars fifteen and the Nabisco fifteen that happen at other headquarters. In fact, this probably happens at any company where there’s lots of tasty food within a few dozen feet of your desk. Like elsewhere in Silicon Valley, food has been a part of the culture from day one, and it’s used to help fuel innovation and collaboration. The key is to make sure this is all aligned toward supporting employee well-being. To this end, they did some experiments based on our research. The first steps to make the micro-kitchens more slim by design were pretty straightforward. Based on the results of our other cafeteria studies and our smarter lunchroom findings (described in the next chapter), the goal was to proactively nudge Googlers to eat a little healthier—to pick up an apple more often than a cookie. We knew the three things that determine what a person eats in a free food environment: what’s most convenient, attractive, and normal. So here’s what was done:
From the book, SLIM BY DESIGN: Mindless Eating Solutions for Everyday Life by Brian Wansink, Ph.D. Copyright © 2014 by Brian Wansink, Ph.D. William Morrow, an imprint of HarperCollins Publishers. Reprinted by permission.