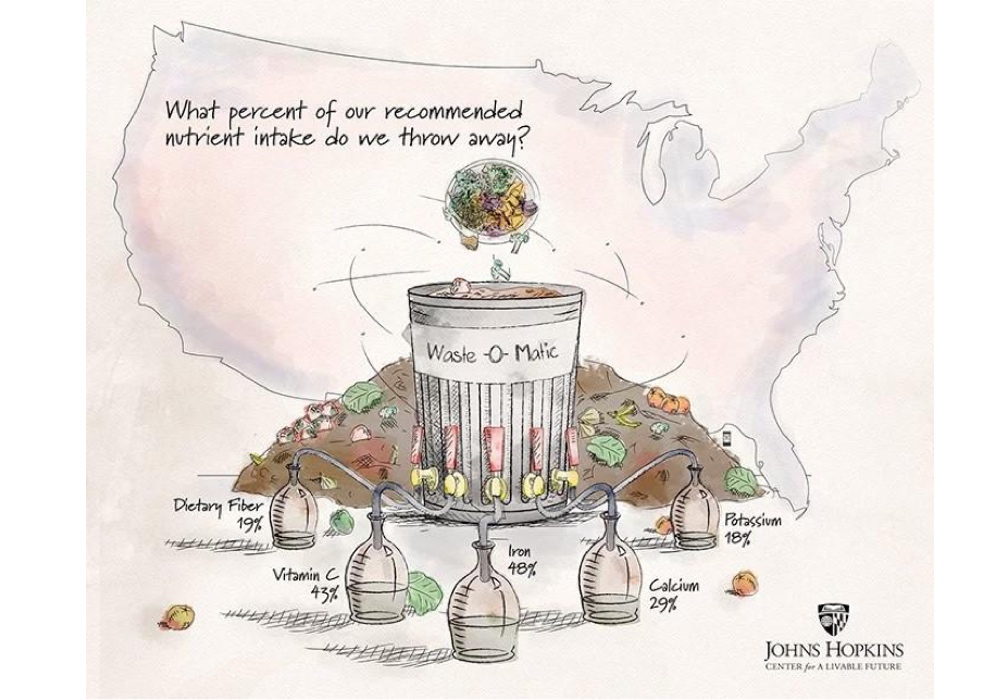 The True Cost of Wasted Food

Americans waste an immense amount of food. Estimates are that as much as 40 percent of our food supply ends up being thrown away. As disturbing as this is, even more disheartening is the amount of perfectly good nutrition that is being wasted.

This is especially true when you consider that nearly 20 percent of American households either don’t know where their next meal is coming from, miss meals completely or don’t have enough to eat. Even those households with a steady source of food often do not get enough of certain vitamins such as A, C, D and E. And they don’t eat enough fiber-, calcium- and potassium-rich foods.

Perishable foods like fruits and vegetables are wasted at a particularly high rate and are one of the biggest causes of the high losses of nutrients.

In order to establish the nutritional value of food waste, researchers looked at 213 foods listed in the National Nutrient Database for Standard Reference. They found that not only were many calories of energy lost to food waste, the loss from under-consumed nutrients was significant.
ADVERTISEMENT
Wasted Food Means Wasted Nutrients

Food waste amounted to a loss of 1,217 calories, 33 grams of protein, 5.9 grams of fiber, 1.7 micrograms of vitamin D, 286 milligrams of calcium and 880 milligrams of potassium per person per day.

When you consider that in 2012, American women fell short of meeting their fiber needs by 8.9 grams per day, the significance of this much wasted fiber could go a long way towards meeting that gap for over 206 million women.

Numbers like these make it clear that Americans need to do better when it comes to not letting so much food go to waste. There are things people can do to use more of the food they have instead of throwing it away. For example, the “use by” and “sell by” dates on food packaging are confusing to consumers and contribute to food waste.

ADVERTISEMENT
Perishable foods like fruits and vegetables are wasted at a particularly high rate and are one of the biggest causes of the high losses of under-consumed nutrients.

Programs are underway to reduce both agricultural and pre-consumer food waste at farms and processing plants that can help change the amount of food that is discarded by consumers and change consumer and industry attitudes toward food waste. A less than two percent recovery of food waste would provide 2,000 calories per day for over 3 million adults.

Ignore those “sell by,” “best by,” and “use by” dates on food packages. They are not expiration dates.

Even though “…only a portion of discarded food can realistically be made available for human consumption,” the authors believe “efforts to redistribute surplus foods where appropriate and prevent food waste in the first place could increase the availability of nutrients for Americans, while saving money and natural resources.”

If each household makes an effort to buy food more carefully, use more of what they have and donating, rather than tossing, food they cannot use, the reduction in food waste — and the nutritional boost to Americans' diets — are bound to improve.

ADVERTISEMENT
Things You Can Do to Reduce Waste at Home

RELATED STORIES
Government-Subsidized Obesity
Your Pocketbook vs. Your Waistline
What Discount And Convenience Stores Are Doing To Our Health
LATEST NEWS