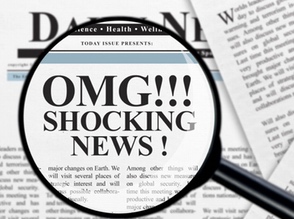 Why We “Love” Bad News

Alice G. Walton
Newspapers know that bad news draws us in more than good news. But there is a cost.

Bad news — stories about tragedy, close calls, and danger — seems to call to us from tabloids at the supermarket checkout counter, social media sites, and those irresistible stories at the bottom of so many web pages. Whether we gravitate to bad news or the media just seems to feed it to us (“if it bleeds, it leads” is a common journalistic quip), negative events permeate our collective consciousness.

Our brains are programmed to pay attention to negative things.

But why is bad news so much more memorable than good news? A new study by a team at Washington State University set out to find out why we react more strongly to bad news, and just how harmful this can actually be. They uncovered some interesting answers.
Economics and Evolution Raise the Profile of Bad News
ADVERTISEMENT
The researchers developed a computer model based on findings from economics which show how, as people become wealthier, each dollar matters less to them. This sort of phenomenon also applies to the payoff we get from reading about a positive or negative event.

“When you are very poor and hungry, for example, each dollar is worth a lot as it helps you buy enough food to eat,” study author, Jill McCluskey, said in a statement. “But once you have more money and can count on regular meals, it’s the losses that will affect you more. In terms of happiness and well-being, a $1,000 loss will affect you more than a $1,000 windfall.”

As people become wealthier, each dollar matters less to them. “[O]nce you have more money and can count on regular meals, the losses affect you more than windfalls. ’

The media use this logic to promote different types of stories. For instance, people will be far more likely to read about the recent Listeria contaminations in some popular food brands than they would a positive news story about the food industry. “Food scares are a good illustration as they are widely covered by the media,” McCluskey said.
ADVERTISEMENT
A Vicious Cycle Leads to Wasted Spinach
That's because they command our attention: To protect our health by avoiding the suspect food. But the often alarmist headlines capitalize on our fears.

There’s also an evolutionary reason behind our tendency to focus on negative news. Our brains are programmed to pay good attention to negative things — if we don’t, we might miss something that could cost us our lives. It’s not just rubbernecking; it can be lifesaving.

Media coverage that appeals to negative emotions like fear may not accurately represent the scope of a problem, which is perhaps the biggest concern of all.

One problem with this phenomenon is that the negative coverage is not always good for our society or for our psychology. The media’s coverage of certain events can skew our understanding, leaving us feeling unnecessarily vulnerable or afraid. That's what happened after an outbreak of E. coli was traced to salad bars.
ADVERTISEMENT
“Even after the E. coli scare was over, people still wouldn’t buy spinach,” McCluskey said. “There can be a lot of impact on growers, and wasted food, with these scares.”
Bad News As a Source of Misperception
It is also true that media coverage that appeals to negative emotions like fear may not accurately represent the scope of a problem, which is perhaps the biggest concern of all. This can work both ways. In the case of the spinach salad scare, too many people gave up on a healthy green rather than wash it properly.

Our attention to negative news can also eventually blind us to very real dangers. Most scientists believe that humans are to blame for climate change, but the public tends not to, having heard the scary news many times over and only occasionally becomes aware of the rising sea levels and loss of polar ice associated with it. This can seriously affect our likelihood of making the necessary changes to stop it.

If a story is especially gruesome, and you can’t do anything to solve it, maybe it’s better to just acknowledge the headline and avoid the gory details by not clicking on it.

It’s also not particularly good psychologically to be excessively reading about negative happenings compared to the positive ones — it can simply be depressing to the reader, the authors warn.

Negative stories can be hard to avoid, but being aware of our own likelihood of clicking on them — and the media’s tendency to push them — can help you cut down your daily intake. Staying informed about global developments is important, but if a story is especially gruesome, and you can’t do anything to solve it, maybe it’s better to just acknowledge the headline and avoid the gory details by not clicking on it.

Being aware of your tendency to gravitate toward negative stories can help you separate the news you need to know from sensationalized stories that are simply there to steal our attention.

The study was carried out and published in Information Economics and Policy.