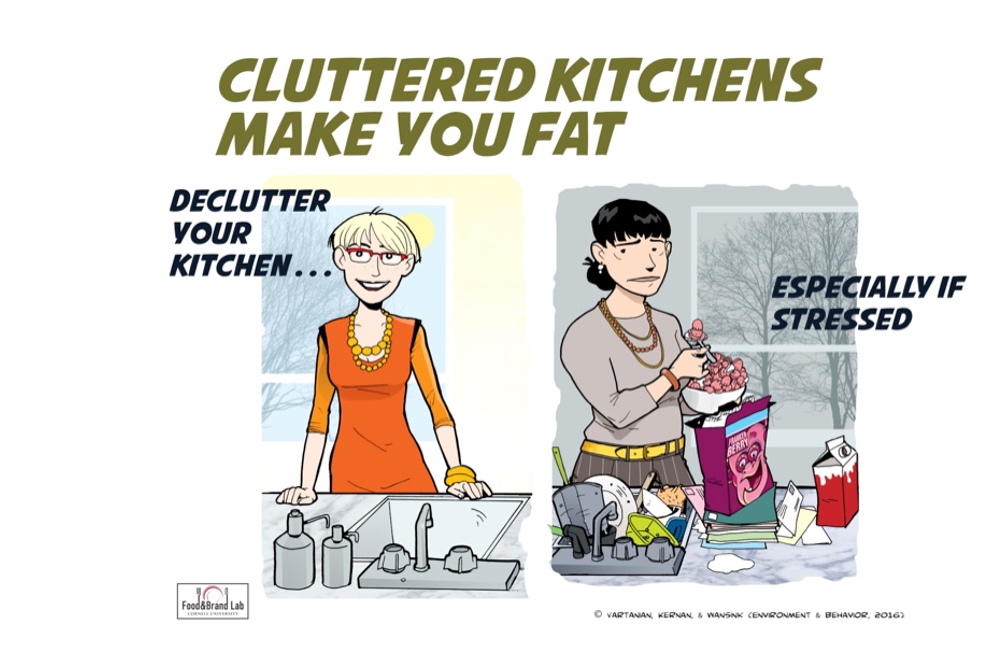 If you want to lose weight, clean up your kitchen. Really. If your kitchen is cluttered with dishes, utensils, food packages and mail piled high, it is a hazard to your waistline.

Kitchens with cluttered counters cause stress, and what do many of us do when we’re stressed? We eat. In fact, we may eat twice as much, particularly when it comes to sweets, according to a new study.

In the study, conducted at the Cornell Food and Brand Lab, female volunteers were randomly divided into groups and asked to write about a time in their lives when they felt (a) particularly chaotic and out of control, (b) a time when they felt particularly organized and in control, or (c) the last lecture that they attended (a neutral condition).

The women were then led to one of two kitchens to wait for someone to arrive. One kitchen was chaotic — noisy, disorganized, with papers and dirty dishes strewn about. The other kitchen was clean, organized, and quiet. There were snacks — carrots, crackers, and cookies — available in both kitchens, and the women were told to eat all they wanted.

ADVERTISEMENT
Faced with a chaotic kitchen, women who had written about being out of control ate more than the other women. And, not surprisingly, they mostly ate the cookies, not the carrots. In fact, they ate twice as many calories in ten minutes as the women confronted with a chaotic kitchen who had written about feeling in control. The cluttered kitchens had less impact on the amount of low-calorie foods — carrots or crackers — eaten.

A calmer, more organized environment leads people to snack less than they do in a more chaotic and cluttered place.

It's the combination of stress and mess that causes real problems. “Being in a chaotic environment and feeling out of control is bad for diets. It seems to lead people to think, 'Everything else is out of control, so why shouldn’t I be?'” author Lenny Vartanian said in a statement. He believes the findings would be the same for men, though they typically don't spend as much time in the kitchen as women do.

As the researchers pointed out, a calmer, more organized environment seems to lead people to snack less than they do in a more chaotic and cluttered place. So having a tidier kitchen is a hedge against the kind of mindless eating most of us do when we are anxious or upset.

Meditation might be one way to feel more in control and resist snacking, study coauthor, Brian Wansink, the Director of the Cornell Food and Brand Lab, said, “It’s probably easier just to keep our kitchens picked up and cleaned up.”

ADVERTISEMENT
So look around your kitchen. If it’s cluttered and chaotic, you might be consuming more calories out of stress. The stressed women in the study ate 53 extra calories in just 10 minutes. Think about how many minutes you spend in your kitchen every day.

Even though it takes some effort, it’s probably worth it to give your kitchen a good cleaning and work daily to keep it free of clutter. Get other household members to help keep things put away. Avoid leaving dirty dishes until “later.” Toss old newspapers and junk mail, and have a place for documents that need your attention.

Keeping a kitchen clean, calm, and organized is a daily effort, but it is a fairly simple way to stay on top of your diet and avoid feeling stressed out.

The study is published in Environment and Behavior.