Dr Shonka is a Fellow and Dr. Gilbert is the Deputy Chair and Professor, the Department of Neuro-Oncology, the University of Texas M.D. Anderson Cancer Center, Houston, TX. This article is an adaptation of a longer piece written for medical professionals which appeared on our partner site, Cyberounds.com.

Gliomas are the most frequently occurring malignant primary brain tumors and include astrocytomas, oligodendrogliomas and ependymomas. Combined, these cancers account for approximately 40% of all primary brain tumors and over 80% of all malignant tumors in the brain and spinal cord. Typically, on a scale of I (low) to IV (high), Grades III and IV are referred to as “malignant” glioma. As glioblastoma (GBM), the only grade IV glioma, accounts for approximately 50% of gliomas, a majority of glioma research has focused on this tumor type (see Figure 1). 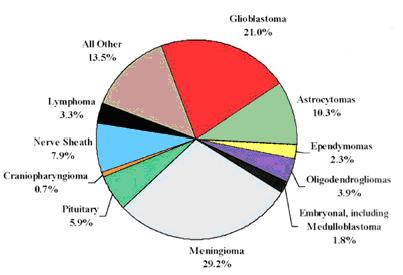 The current standard therapy for GBM changed in the last five years. The report of a large prospective randomized phase III trial from the European Organization for Research and Treatment of Cancer (EORTC) and The National Cancer Institute (NCI) of Canada supported the use of chemotherapy with temozolomide used at the same time as standard radiation therapy followed by adjuvant (additional) temozolomide.

One of the ways to slow tumors involves interfering with the tumor’s blood supply. Since glioblastoma is rich in blood vessels, this appears to be an effective approach.

Almost always, GBM will progress after traditional chemotherapy. Which is why the field of neuro-oncology is focusing on the uses of molecularly targeted agents to help stop the growth of these cancers. In this article, we highlight the pathways that lead to these brain and spinal cord cancers and we describe the mechanisms by which targeted therapy may act to slow down these cancerous cells.

As we learn more about how gliomas form, scientists identify more potential targets at which to aim therapy. One of the ways to slow tumors involves interfering with the tumor’s blood supply. Since glioblastoma is rich in blood vessels, this appears to be an effective approach.

Glioblastoma obtains its blood supply by: taking over existing vessels in the brain, by branching out from pre-existing vessels and by attracting cells from the bone marrow that stimulate vessel growth out of the blood and into the perivascular space). Interfering with these vascular endothelial growth factors (VEGF) can potentially starve a tumor of its blood supply. As we learn more about how gliomas form, scientists identify more potential targets at which to aim therapy. One of the ways to slow tumors involves interfering with the tumor’s blood supply. Since glioblastoma is rich in blood vessels, this appears to be an effective approach.

Bevacizumab has been approved by the FDA for recurrent GBM. One study showed that 42% of patients were progression-free for 6-months and had overall survival (OS) of 8.7 months when receiving bevacizumab alone.

ADVERTISEMENT
We call bevacizumab an inhibitor of VEGF because it blocks the VEGFR signaling the cancer cell needs to grow and survive.

Additionally, 50% of GBM patients who took the drug had less brain swelling, 58% were able to decrease their corticosteroid dependency and 52% had improvement in their neurologic symptoms. Side effects include wound healing delays, bleeding complications, arterial thromboembolic events, loss of blood protein into the urinea and high blood pressure in up to 30% of patients. Even though the drug is manufactured for human use, up to 5% of patients can have infusion-related symptoms of fever, chills, hives, breathing problems and low blood pressure.

Cediranib
Cediranib is another VEGR inhibitor but it works to block many more pathways (for example, PDGFR and c-Kit). It also, unfortunately, produces side effects such as fatigue, diarrhea, nausea and loss of appetite, as well as low blood in almost 20% of patients. It has, however, not been shown that bevacizumab and cediranib actually decrease tumor size and its usefulness may be in improving some of the symptoms caused by the tumor. For this reason, these inhibitors are typically used in combination with chemotherapy. Many studies are ongoing, including evaluating bevacizumab with chemo (temozolomide) and radiation for primary GBM, as well utilizing cediranib in combination with a chemotherapeutic (lomustine) for recurrent GBM.
Therapies Designed to Inhibit Tumor Growth

Growth factors and their receptors are other areas where chemotherapies operate to disrupt cell – and tumor – growth.

Drugs Targeting EGFR, Epidermal Growth Factor
The epidermal growth factor receptor (EGFR) is the first member of a group of four receptors known as the erbB receptor family. The gene encoding EGFR is the most frequent gene in GBM, occurring in approximately 40% of primary GBM.

The most common variant in GBM is EGFRvIII, present in up to 50% of glioblastomas. EGFRvIII is tumor-specific and found on the cell surface, which makes it easier for a targeted drug to reach the receptor and block its cancer-producing actions.

Erlotinib
Erlotinib is a drug that blocks the ability of cancer cells to multiply quickly and spread to other tissues and is targeted against the EGFR tyrosine kinase. The most common side effects include an acne-like rash that can be quite disfiguring, (see Image 1), diarrhea, loss of appetite, mild elevations in liver enzymes and, rarely, damage to the lung tissue.
Image 1.
Erlotinib Rash. 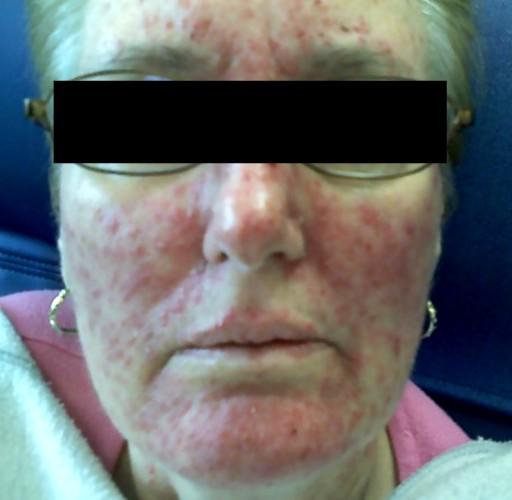 Nimotuzumab and Cetuximab
These monoclonal antibody drugs bind to the epidermal growth factor receptor (EGFR) that controls cell division, thus slowing the growth of the cancer. These drugs also appear to make radiation treatment more effective,[21, 23 And, also helpful, is that nimotuzmab has fewer side effects, particularly that patients are less likely to suffer from the rash shown in Image 1.
Drugs Targeting Platelet Derived Growth Factor Receptors (PDGFR)
The platelet derived growth factor (PDGF) family has five forms that act upon two different receptors called PDGFR-alpha and PDGFR-beta. As with the other two inhibitors they block the action of a cancer-inducing receptor that is found on the cell surface. Though brain cancers caused by this receptor are rare, they are often seen in more serious (that is, Grade III and IV) gliomas, particularly oligodendrogliomas.
Imatinib
Imatinib is an inhibitor that has had much success in prolonging the lives of patients with chronic myelogenous leukemia (CML). Researchers hoped that it would be effective in brain cancers but studies of imatinib have not found it to be highly active.
Drugs Targeting Glioma Cell Growth
Rapamycin (mTOR)
Several drugs have been developed to affect the mTOR signaling pathway that plays a crucial role in regulating glioma cell growth, survival and proliferation. The immunosuppressant sirolimus (rapamycin) directly inhibits mTOR activity, hindering the growth of cancer cells in the laboratory and in test animals. As a consequence of this finding, sirolimus derivatives have been developed as targeted therapies, one of which is temsirolimus. This drug works against the RNA of the cancer cell so that the cell can’t divide and grow. Side effects include bone marrow suppression, nausea, vomiting and diarrhea and increased fats in the blood. Though studies have found that temsirolimus has limited effectiveness, scientists have ongoing studies to see whether it will be more effective if combined with radiation, chemotherapy or other targeted drugs.
Other Approaches
PKC-beta Inhibitors, Enzastaurin
Another pathway, the protein kinase C (PKC) pathway, has been shown to play a role in the regulation of cell proliferation. An early (phase I/II) trial of the drug Enzastaurin as a single agent, showed promising efficacy but with the concern that drug levels in the brain were not high enough to be really effective. However, another early (phase I) study at higher doses led to significant side effecs – decreasing platelets and affecting the heart’s rhythm. Further trials using this agent in combination with chemotherapy or in other settings are ongoing.
HDAC Inhibitors, Vorinostat
In recent years, histone deacetylase inhibitors (HDACIs) have emerged as a promising new category of anti-cancer agents. They are attractive new drug candidates because they kill cancer cells, but have little effect on normal cells. One of these inhibitors is a drug called vorinostat. Its most common side effects from a phase II trial included fatigue and decreased platelets. Most studies on the use of vorinostat are testing the drug in combinations with bevacizumab, bortezomib, irinotecan, temozolomide, isotretinoin, carboplatin and radiation.
Thalidomide and Lenalidomide
Another pathway called basic fibroblast growth factor (b-FGF), also helps to promote blood vessel growth in malignant gliomas. Thalidomide is believed to inhibit several of these pathways. Thalidomide, well-publicized for its negative effects on fetuses many years ago, produces other side effects in glioma patients including fatigue, peripheral neuropathy, rash and thromboembolism. Lenalidomide, a similar chemical to thalidomide, can also overcome cellular resistance to thalidomide.
Conclusion

Although the utilization of targeted agents in oncology is not new, it is only in the last several years with the discovery of specific molecular pathways involved in the growth of gliomas that neurooncologists have begun to test these agents as therapies against gliomas. Because malignant cells often survive by using other pathways with alternative signaling, inhibitors that attack more than one pathway, the so-called multikinase inhibitors such as sorafenib and sunitinib, may prove to be more effective, as may combinations of the targeted agents discussed here.