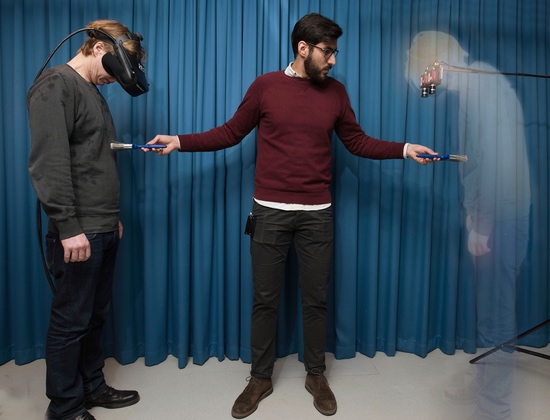 The Perks of Being Invisible

Leslie Carr
When special glasses tricked people into perceiving their bodies had disappeared, so did social anxiety.

Who hasn't wanted to be invisible, to be present in a situation but unseen — and therefore not judged — by others? Now a team of neuroscientists has created that experience.

Researchers from Sweden's Karolinska Institutet created the illusion of having an invisible body to see how it affects the brain and body. The feeling of invisibility is a great stress reducer, particularly when it comes to social anxiety.

There is no Harry Potter invisibility cloak, of course; instead, there is the perceptual illusion of having one's body disappear.

ADVERTISEMENT
The researchers accomplished this by having a participant stand wearing a head-mounted display. He or she is asked to look down at his or her body, but instead of seeing their own body, the participant sees empty space.

Researchers used a long-handled paintbrush and touched the participant, while doing exactly the same thing with another paintbrush held in the other hand, in mid-air in full view of the subject, to give subjects the feeling of having an invisible body — the subject perceived that the paintbrush they felt was in fact touching air.

“Within less than a minute, the majority of the participants started to transfer the sensation of touch to the portion of empty space where they saw the paintbrush move and experienced an invisible body in that position,” Arvid Guterstam, lead author of the present study, said in a statement.

To make sure the illusion of invisibility was really operating, researchers pretended to stab air associated with the invisible body. Participants wearing their headsets recoiled as though under attack. But when viewing the same “stabbing” without the headset, the knife thrusts into the air stimulated no such response.

To observe how the feeling of invisibility could affect social anxiety, the participants were placed in front of an audience of strangers.

ADVERTISEMENT
“We found that their heart rate and self-reported stress level during the ‘performance’ was lower when they immediately prior had experienced the invisible body illusion compared to when they experienced having a physical body,” Guterstam added.

The team hopes that the results of the study will may help in the development of new therapies for social anxiety disorder.

But perceiving oneself as invisible does have a potential downside. People unconcerned about others' approval might be tempted to all kinds of behavior.

“Follow-up studies should also investigate whether the feeling of invisibility affects moral decision-making, to ensure that future invisibility cloaking does not make us lose our sense of right and wrong…. ” said principal investigator, Henrik Ehrsson, professor in the Department of Neuroscience.